Getting to Know Someone

How do you get to know someone you're not acquainted with? Suppose that the person lived on the other side of the world or hundreds of years ago or has recently died—how would you learn more about them and what they are/were like? What if you couldn't communicate with them in any way? How could you know them better?

Could you look at things that person had made? Looking at a painting by an artistic person tells you something about their brush skill, what time period they lived in, and maybe what they desired to say with the piece. Observing an architect's building tells you something about their creativity, style, and, if it's still standing, the reliability of their designs. You might learn some vague things about them in this way. Although these would be true, any insights you gain would still only give you a blurry image of the person.

Could you read books about them? What other people have said about their life in writing might be another next step in learning about a person. You could read biographies on their upbringing or their beliefs on different issues. You could study and explore their ambitions and accomplishments. Would that give you a fairly accurate picture of their character? Would you know the person personally yet? Hmm...maybe what others say about a person still isn't a complete picture.

Could you read what they have written themselves? You could try to gain an even better understanding of someone's life through reading what they have written themselves. Now you'll get an idea as to what the person was thinking about any given situation. An autobiography, interview answers, or books the person has personally authored can give a comprehensive insight into their minds. If they are honest in what they say, it's like a sneak-peak into their inner thoughts.

Could you look at their pictures or videos? Since the invention of captured images on paper, it has become easier to look at people's lives through pictures and videos—even after their death. Through this medium, you not only get to hear what the person is saying, but you can see them doing it. "A picture says a thousand words," so they say, and "a video says a million." What a unique insight we can gain through images.

But the very best way to get to know someone is to talk to them yourself, one-on-one. Of course, this may be impossible in some cases that I laid out in the beginning, such as if the person lived in the past or has died. When it comes to God, what can we do to know Him? Jesus isn't a physical person on the earth anymore, so how can we see Him, observe Him, or talk to Him?

Yes, God is invisible (1 John 4:12). As a result of this invisibility, many people declare that it is impossible to know God. They reason that if we can't see Him, He probably doesn't exist, and that even if He does, we certainly cannot know who He is—nevermind what He is like.

Despite the fact that we can no longer be in the physical presence of God on earth, I believe we can still know both who God is and what He is like. Although we cannot see Him, He has revealed Himself in three main ways:

In my next post, I'll talk about how we can learn about God by observing the life of Jesus Christ. I hope to see you then. 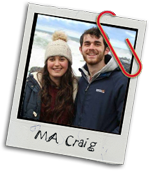 M. A. Craig loves the outdoors (not great when you live in rainy Northern Ireland). He is a follower of Jesus, husband to Chloe, theologian, writer, and "father" to Lucy the pug.