I'm a chaplain for my Boy Scout troop, and sometimes I've had to really step out of my comfort zone. A year or two ago, there were some older boys in my troop who were making fun of a younger kid, Jack*. They weren't doing it to his face, but he heard the utterly demoting comments against him.

I had no idea what was happening at the time because I was sitting at the fire in the main area of the cabin. But when I went back my room, which was shared with some other boys, including the one who was being harassed, I could tell that something was amiss with this guy.

He was sitting by himself while everyone else was playing and joking around. I asked someone if they knew what was wrong, and one of the boys explained what had happened and why he was upset. I wondered why none of them had helped him through his sorrow even though they knew he was hurt.

I went up to his bunk and talked to him. He said he felt useless and like a mistake, a failure, a flaw of the human race, and that God must not care about him. He said he wanted to die so no one else would have to suffer with his annoyance and flaws.

Right before the campout, I was listening to Peter Furler's album, On Fire, and the song entitled "Psalm 23". In the Bible, Psalm 23:1-6 goes like this: "The Lord is my shepherd; I shall not want. He makes me to lie down in green pastures; He leads me beside the still waters. He restores my soul; He leads me in the paths of righteousness For His name’s sake. Yea, though I walk through the valley of the shadow of death, I will fear no evil; For You are with me; Your rod and Your staff, they comfort me. You prepare a table before me in the presence of my enemies; You anoint my head with oil; My cup runs over. Surely goodness and mercy shall follow me All the days of my life; And I will dwell in the house of the Lord Forever." (NKJV)

Because the psalm was in my mind, I read it to Jack, telling him that, despite what others thought, he was still protected by the Lord, and God could and would protect him against ALL evil. I then read him another personal favorite, John 3:16: "For God so loved the world that He gave His only begotten Son, that whoever believes in Him should not perish but have everlasting life." (NKJV) I hoped that this would reinforce the message that God loved him enough, even as an individual, to give His ONLY Son to save him.

We then prayed together. I think Jack felt redeemed by the Lord. My prayer is that he remembers that no matter his flaws, Jesus still loves him.

"We are hunted down, but never abandoned by God. We get knocked down, but we are not destroyed." —2 Corinthians 4:9 (NLT)

*not his real name 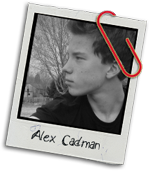 Alex Cadman was once a part of Cat's in-person teen writers groups and now produces videos for 412teens through his video production company. He wishes to serve the Lord in all the ways he can.