Regrets: one of life's many drains, especially in teens. From stuff as little as a mistake that you made in the third grade to being picked last for a team in eighth grade to the big and horrid events in your life like divorces, fights, etc. Some things just leave a bruise; others leave a scar. But even the largest wounds will eventually heal; it all depends on how often you pick at and look at it.

What is regret? A simple dictionary definition is: "to feel sad, repentant, or disappointed over (something that has happened or been done, esp. a loss or missed opportunity)." So really, regret is nothing more than a feeling. It's a change in your emotions that is caused by your memories. Those memories can be of something someone has done to you, a mistake you've made, or even an amazing opportunity that was missed. I think feelings can be controlled for the most part; you just have to find a way to do so. And that leads to my next point.

How do we usually deal with regrets? Well, most of us don't. We just hold on to them like they are unforgettable, unforgiveable, but still intolerable. They are annoying, aren't they? They come up at the most awkward times, like when we see something that slightly resembles or triggers that flashback to that mistake or event. Have you felt that before? I know I used to feel them all the time. I've almost let them slow me down a while back, but now I am trying not to let them.

Why do we hold on to regrets? My personal favorite excuses were: "It's too hard." "It's unforgivable." "I am unable to." "It's who I am, and I can't change that." Okay, sure, it's your history. Some of it is what made you to who you are today, but many people who are a mess become Christians. But they most often fall because their old life is all that they knew and they don't know how to change.

Here's the awesome thing though: You don't HAVE to change. No, really, hear me out... What's cool about really getting hooked by God and feeling His love and grace inside you is found in 1 Peter 5:10: "And after you have suffered a little while, the God of all grace, who has called you to his eternal glory in Christ, will himself restore, confirm, strengthen, and establish you."

Notice how it doesn't say "RE-establish you." What does re-establishing sound like to you? Well, to me, it sounds like what you can do to a computer. You can "restore" your hard drive, "strengthen" the hardware in the motherboard, and "install" new software in it—that's improving what's already there. But what Jesus does is different. When He died, He gave us new life. He pretty much took out the entire human nature software and established His own NEW software (and spiritual hardware), replacing your heart so you would become a new person (2 Corinthians 5:17).

You aren't the same once your life is made new (or "Born Again" if you want to use Christianese). It's kind of weird to say, but after rebelling against God for your entire life, you will suddenly find yourself changed into a new creation—you really will be changed. Look at Paul, he was a guy named Saul who either killed or arrested followers of Christ. Then he had a face-to-face encounter with Jesus and suddenly, he was a new man who went on to become one of the greatest apostles in the New Testament!

Some Tips on Dealing with Regret:

"Not that I have already obtained all this, or have already arrived at my goal, but I press on to take hold of that for which Christ Jesus took hold of me. Brothers and sisters, I do not consider myself yet to have taken hold of it. But one thing I do: Forgetting what is behind and straining toward what is ahead, I press on toward the goal to win the prize for which God has called me heavenward in Christ Jesus.

"All of us, then, who are mature should take such a view of things. And if on some point you think differently, that too God will make clear to you. Only let us live up to what we have already attained." —Philippians 3:12-16 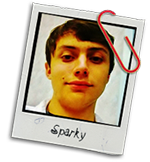 Sparky is a 16-year-old attending a private high school. A childhood injury limits his abilities, but God has used it to focus him onto His will. Sparky is a writer/poet with a novel in process. He's also a technology expert and loves to get into God's Word. Through many pains, addictions, and depression, God has saved him. He's thankful to be His servant forever.