How can I receive forgiveness from God?

When we talk about biblical forgiveness, it's the act of choosing not to hold another person's wrongdoing against them in the future. Debt forgiveness is similar at the core; it cancels out what was owed, removing any need to repay the debt. Forgiveness from God is a melding of these two concepts of forgiveness.

Our Debt to God

Every human being has a debt to God that can never be paid with words or deeds in this life. We have all sinned against Him by rebelling against His holiness (Romans 3:23). No one is innocent from sin. When God created the world, He made it perfect. This included men and women (Genesis 1:27). However, because God loves us and doesn't force us to love Him back, He gave humans the ability to make a very important choice: love Him in return or reject Him.

To love God is to obey Him (John 14:15). To reject God is to choose one's own way (John 3:36). And ever since the first human beings, we've been choosing our own way (sin) instead of God's way (Genesis 3). Sin separates us from God, and therefore, we can't get back to God on our own (Ephesians 2:8-9). He is holy; nothing unholy can enter His presence (1 Samuel 2:2; Revelation 21:27). Romans 6:23 tells us that "the wages of sin is death," which refers to the debt penalty of spiritual death (eternal separation from God) for every human being.

We All Owe the Same Debt

"For by grace you have been saved through faith. And this is not your own doing; it is the gift of God, not a result of works, so that no one may boast." —Ephesians 2:8-9

The Bible tells us that there is absolutely nothing we can DO to earn God's forgiveness for our rebellion of sin against Him. No matter how many good things we do, we can never earn or deserve His forgiveness—not even a little bit.

On one hand, this is a good thing because it levels the playing field for everyone. No one can brag that they're "holier" or worthier of God's forgiveness than another. We are all the SAME when it comes to sin. On the other hand, what can we ever do to repay this debt if we can't do it on our own?

Someone to Repay Our Debt

Yes, God made it impossible to do this on our own. But God loves us so much that He made a way to receive forgiveness for our debt. Our Heavenly Father, Creator of the Universe, sent His one and only Son Jesus Christ to live as a fragile human being (just like we are) and lead a perfect, sinless life (something we could never do). Then, in Jesus' early 30's, just when it seemed like His ministry was getting started, something both terrible and miraculous happened that changed everything.

God allowed Jesus to sacrifice His own life as payment for the debt of every human being who would ever breathe life—in one fell swoop (John 3:16). 1 Peter 3:18 says, "Christ himself suffered when he died for you, and with that one death he paid for your sins. He was not guilty, but he died for people who are guilty. He did this to bring all of you to God. In his physical form he was killed, but he was made alive by the Spirit."

Jesus' death paid the price for our sins so that we could restore our broken relationship with God through forgiveness of the debt we owe due to our own sinfulness (John 3:16-17; 2 Corinthians 5:21). Jesus died the death we should have. Jesus was separated from God like we should have been. The sacrifice of His blood cleansed us from our guilt of sinfulness (Ephesians 1:7). Three days after His death and burial, Jesus came back to life, proving that the sacrifice He made for us was accepted by God—that it was enough and always will be. (See John 11:25-26; Luke 24; Acts 3:15.)

How to Receive Forgiveness from God

While Jesus has already paid the price for every human being, each person, like the first humans, still has the ability to make an important choice: accept God's loving gift of Jesus' sacrifice as payment for your debt of sin, or reject the gift and go your own way.

God offers His forgiveness to anyone who asks (Ephesians 1:7; 1 John 1:9). He sent Jesus as a one-time sacrifice for every person who has ever lived (Hebrews 10:1-18; 1 John 2:2). There's no sin "bad enough" that Jesus' death could not cover it. As long as you live, you're never too far gone to accept God's beautiful gift of forgiveness. Your Heavenly Father's arms are always open to you.

If you desire this forgiveness from God, to spend eternity with Him in Heaven, to experience joy and peace instead of guilt and shame, to have a relationship with a supernatural being who loves you and has got your back, there is only one thing to do: ASK.

Tell God that you're truly sorry for your sins and that you recognize there's nothing you can do to make it right. Tell Him you believe He sent Jesus to die for you and that Jesus rose from the dead, proving that His payment was sufficient to pay your debt in full. Tell Him that you accept and recognize that Jesus is your Savior from eternal separation from God. (See Romans 10:9-13.)

If these are things you truly believe, then that's it! It's simple. It costs you nothing but faith and trust, yet it cost God something very precious—the death of and separation from His Son Jesus Christ. That's how much He loves you and wants a restored relationship with you. Allow these truths to penetrate your heart. This is a decision that will change your life forever.

God offers His forgiveness to anyone who asks (Ephesians 1:7; 1 John 1:9). He sent Jesus as a one-time sacrifice for every person who has ever lived (Hebrews 10:1-18; 1 John 2:2). There's no sin "bad enough" that Jesus' death could not cover it. As long as you live, you're never too far gone to accept God's beautiful gift of forgiveness. If you want to restore your relationship with God, there is only one thing to do: ASK (Romans 10:9-10). 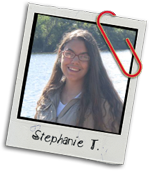 Stephanie is a 21-year old with a passion to see believers grow and become passionate in their relationship with the Lord. She is a lover of sweat tea, sunshine, and the freedom that comes from Christ. In her free time, she can be found singing, playing guitar, writing or jamming out to Hawk Nelson, Phil Wickham, and worship music. Her dreams are to become a worship leader and a published author, while living a life full of fun and joy that comes from the Lord.