How can I treat women with more respect?

Despite all the ways women are celebrated today as pioneers or innovators, they are often still perceived as nothing more than objects of desire. It's not just Hollywood and advertising that's to blame, but our culture that elevates or lowers women based on their attractiveness. Young men, you must consider how you are viewing women, both in a general sense and as specific individuals in your life.

Obviously, God made guys to be attracted to women and vice versa. The problem is too many of us guys ruin friendships by thinking, "She smiled at me. She must want to be more than friends!" This line of thinking reveals a problem in our hearts: we don't respect women. We need to see women as people first, as fellow human beings.

Here are some guidelines to consider for your relationships with women (friendly or otherwise). They will help you to maintain better, healthier friendships with women, while also getting you prepared to pursue a relationship when that is CLEARLY a possibility.

1. Treat her as a sister in Christ.

OK, thinking about a girl you like as your sister doesn't seem very appealing, but it's one of the key lessons to learn. 1 Timothy 5:2 says, "Treat younger women as sisters with absolute purity." You need to view yourself as a fierce protector of the women in your life. You'd protect your mother or your sister from some goon, right? Well, we need to make sure we aren't acting like that goon towards the women we meet.

To treat a woman with absolute purity means to value her as a person. It's impossible not to notice that a woman is attractive, but it IS possible to treat her as a person who is valuable for her thoughts and beliefs first and foremost. Here's the best part of treating women this way: you will more than likely keep more friends! When a couple's relationship gets physical, a breakup can ruin the friendship because they shared way too much to ever go backward. So a couple that values each other and treats one another with purity can remain friends even when they realize their romantic relationship isn't going to work.

Let's kill a lie right here and now: pornography is NOT the "safe way" to satisfy sexual temptation. Satan's lie is, "Viewing and responding to pornography is better than actually having sex with someone." The truth is, "Everyone who looks at a woman with lustful intent has already committed adultery with her in his heart" (Matthew 5:28).

Pornography is a lie, turning women into objects of desire or tools to be used. If you get into the mindset that women are objects now, you'll have the same attitude toward your wife one day. You think you won't, but you'll begin to expect her to become the outlet for your fantasies. That is selfish. That is sin.

"Flee from sexual immorality. Every other sin a man can commit is outside his body, but he who sins sexually sins against his own body. Do you not know that your body is a temple of the Holy Spirit who is in you, whom you have received from God? You are not your own; you were bought at a price. Therefore glorify God with your body." —1 Corinthians 6:18-20

The Bible tells us that Jesus was tempted in every way that we are, and yet He didn't sin (Hebrews 4:15). That means Jesus was even sexually tempted. Women followed Him and supported Him—not because He was hot (Isaiah 53:2 says he was an ordinary-looking guy), but because He respected them and showed them they were just as valuable to God as anyone else. Jesus shocked the woman at the well when He spoke to her despite her nationality, past sin, and gender (John 4:9). He taught women about God, another thing that Jewish men were told not to do. Basically, Jesus treated women like they had never been treated before!

Hebrews 12:2 reminds us that when we're not sure what to do, look to Jesus. Do what He did! Certainly there were women who were willing to give themselves to Jesus—body and soul—because they thought He would love them physically. Instead, He loved them like sisters and cared for their well-being as individual people.

What about dating women?

We don't have to ask, "What would Jesus do?" in this situation. Instead we look at Scripture and say, "Here is what Jesus did!" Jesus treated women with respect and loved them like sisters.

This doesn't mean that, as a young Christian man, you can never pursue a relationship with a girl. Just be sure it's an actual relationship and not simply a desire driven by physical passion. Any relationship you pursue should be built on respect, real expectations, and treating her like Jesus would. For Christians, dating relationships should not be used for fleeting pleasures, but rather serious intentions must be considered.

If you treat women like people, with respect and equality, you'll have many more as friends. And if/when the time comes when you are ready for a relationship, you'll be in a much better place because you have modeled a real man, a godly man: our Lord Jesus.

If you are struggling with mindsets that are already established because of ungodly men in your life, you can still choose to stop feeding that mindset. Recognize that women are spiritually, intellectually, and morally equal to you and other men (Galatians 3:28). Respect them by not putting temptation tripwires in front of your own feet (Proverbs 22:5; Matthew 18:7-9). Make purposeful choices about what you allow into your mind, so that your non-respectful, fallen side (James 1:12-15) doesn't get the upper hand and lead to disrespect. Finally, find a Christian brother, with a good spiritual reputation, whom you can emulate (Titus 2:6-8).

Let 1 Timothy 5:2 be your mantra to build and preserve your friendships with women. I can tell you from experience (and being married 18 years to a woman whom I treated as a sister and friend first), I have no regrets about waiting or taking it slow. The bond of trust and respect in our marriage is stronger than it ever would have been otherwise.

Young men, you must consider how you are viewing women, both in a general sense and as specific individuals. We need to see women as people first—whether our relationship with them is friendly or romantic. Treat women as sisters with absolute purity (1 Timothy 5:2), avoid pornography (Matthew 5:28), and look to Jesus for the best example of how to treat women (Hebrews 12:2). Jesus respected women and showed them they are just as valuable to God as anyone else. By doing the same, you will maintain better, healthier friendships with women. Model a real, godly man: our Lord Jesus. Don't focus on FINDING the right person, instead BE the right person. 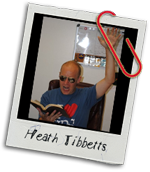 Heath served as a youth pastor and speaker for over a decade around the United States. He now serves as a pastor in Northern Illinois with his wife and three teenage kids. Heath enjoys running, going out on dates with his wife, and helping people grow in their walk with Jesus!