What does the Bible say about self-mutilation / cutting / self-harm?

Self-injury is also called self-mutilation, self-harm, or self-abuse. It can be defined as the deliberate, repetitive, impulsive, non-lethal harming of one's self. Believe it or not, cutting is pretty common (and not just limited to girls). Those who struggle are not alone in this!

Many teens and even adults hurt themselves physically as a way to try and relieve the hurt that is taking over their lives. Cutting is behavior that stems from depression, which is a much deeper problem than the marks in your skin. Self-injury is considered to be an addiction, and it's not easy to just stop. Behaviors include, but are not limited to:

I know school is very stressful. Work can be stressful. Friendships can be stressful. We have a lot going on in life. Sometimes, the emotional pain is unbearable. Relief would be fantastic at some points. But that doesn't mean every outlet for relief is right or healthy (1 Corinthians 6:12; Romans 8:6). If you cut to relieve depression, you're opening not only your flesh, but the possibility to be hurt inside even more.

Cutting in the Bible

As far as what the Bible says about cutting and self-mutilation, in the Old Testament, cutting of skin by was used mainly in practice of false religions. First Kings 18:24-29 talks about the worship of Baal. Elijah invited worshippers to test their false god, but when Baal did not prove any power, "they cried aloud and cut themselves after their custom with swords and lances, until the blood gushed out." Deuteronomy 14:1 mentions cutting skin as an act of mourning for the dead. Even though it was "normal" in the Old Testament, God established a rule against the practice. Leviticus 19:28 says, "You shall not make any cuttings in your flesh for the dead, nor tattoo any marks on you: I am the LORD."

Some may make the argument that cutting is a result of demon possession, based on Mark 5:2-5, which tells the story of a demon-possessed man Jesus healed who "was always crying out and cutting himself with stones." Please understand that self-harm does not equate demon possession. While we can't definitively say that, in any given situation, there is no spiritual warfare going on, we can be sure that the Enemy wants us to stumble and will use whatever means necessary to do so. Jesus says in John 16:33, "These things I have spoken to you, that in me you might have peace. In the world you shall have tribulation: but be of good cheer; I have overcome the world."

Of course, these days, teens aren't usually thinking about religious reasons for self-harm. But that doesn't make it any less serious. It's not only a stress relief but also a cry for someone to notice that something is wrong in their lives. A guy or girl who hurts themselves may feel empty, lonely, fearful, or is unable to express his or her feelings. The act may have been brought out because of past abuse or depression. Cutting is a result of a deeper issue within the heart.

If you know someone who cuts, have compassion (Ephesians 4:32). They are struggling and don't know how else to deal with their pain. It's not their "fault" or something they're doing to hurt you. God wants to heal them, and you can help. Galatians 6:2 says to "bear one another's burdens." How can you love your friend and show them that they matter to you and to God?

If you are struggling with self-harm yourself, please find help in a trusted adult right now. Even though these actions may seem like they help, they could eventually develop into even greater struggles like addictions to drugs, alcohol, or even eating disorders. In fact, you may be dealing with some of that right now. But, my friend, you don't have to suffer alone.

While all addictions are hard to overcome, help and treatment are out there and available—recovery and freedom are possible. We believe that no matter what you're wrestling with—self injury, depression, drugs and alcohol, body image issues, sexual addiction, or other areas of brokenness—God can heal all things (1 Peter 2:24; James 5:16; 2 Corinthians 4:16).

Is cutting linked to suicide?

Self-injury may not always be about attempting suicide, but the damage done while harming oneself always carries the risk of inflicting serious, and even lethal, results, regardless of whether suicide is intended or not. The continued cycle of addiction and self-harm, as in substance abuse and other eating disorders, can have a destructive effect on one's health both physically and mentally, and the struggles can worsen over time without treatment [2].

It's not too late to stop.

If you are practicing self-harm, please talk to counselor or pastor as soon as you can. Depression may be very real, but it doesn't have to be the end of your story. You have the power to make the choice to seek help and recover (Philippians 4:13). It may be hard to imagine, but God intended for your life to be awesome. "For I know the plans I have for you, declares the Lord, plans for welfare and not for evil, to give you a future and a hope" (Jeremiah 29:11). "When the righteous cry for help, the Lord hears, and rescues them from all their troubles" (Psalm 34:17).

Cutting very often stems from a very low view of self, seeing yourself as worthless or invisible, which is totally countered and met by the reality of God's love. Listen to the words of Jesus in Matthew 11:28-30. He's talking to YOU: "Come to me, all who labor and are heavy laden, and I will give you rest. Take my yoke upon you, and learn from me, for I am gentle and lowly in heart, and you will find rest for your souls. For my yoke is easy, and my burden is light."

Self-injury is considered to be an addiction, and it's not easy to just stop. Cutting may be a stress relief or a cry for someone to notice that something is wrong in their lives. Even though these actions may seem like they help, they could eventually develop into even greater struggles like addictions to drugs, alcohol, or even eating disorders. But no matter how broken you feel, remember that God can heal all things (1 Peter 2:24; James 5:16; 2 Corinthians 4:16). Ask God to give you the courage to seek help right away because you cannot do this on your own. "When the righteous cry for help, the Lord hears, and rescues them from all their troubles" (Psalm 34:17). 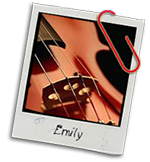 Emily is a teen who enjoys being different than everyone around her. She plays cello, piano, and is currently learning guitar. In her free time, makes things with duct tape. She recently went to Mexico on a missions trip. She has learned and grown through God with these trips. She enjoys going to church every Sunday to worship God with her friends.